When I first started writing my book We’re All Going To Die there weren’t many public conversations on the subject of death, but since then it has really moved along. Sadly, however, it hasn’t moved fast enough.

I’d like to see death education brought more widely into medical schools, for it to become part of every discussion, such as ethics, and how to communicate with patients, pretty much the same way sex education opened up and was being covered when I was a medical student.

This has happened rather effectively in other countries, such as the USA, with the introduction of ‘medical humanities’ subjects to students – but unfortunately, it hasn’t really taken off in Australia.

If this discussion around death was improved, I think it would really change things. There would be a really good platform for not just doctors but all health professionals, such as nurses or physiotherapists, who day in and day out support the dying.

Currently, there’s no formal debriefing mechanism for doctors and health care specialists. Of course we talk to each other and tell black jokes in the tearoom, but it’s not the same thing. Without more formal support, health professionals carry the impact of their interactions with death in a way that inevitably leads to ‘zooming out’ and a risk of burn-out or compassion fatigue.

Just this week I had to tell a patient, a young man with two small children who was doing well in his career, that he was completely riddled with an inoperable, terminal cancer, that the next thing he should do was go home and get his affairs in order. That’s a really difficult thing to have to tell someone but there is no formal, easily accessible debriefing mechanism for the doctors who must have those sorts of conversations, within our current medical facilities.

I hope this changes in the near future, because if it does, then we in the medical profession will be stronger and better equipped to give a much better quality of support to those experiencing the realities of mortality, either as someone dying, their carers or those who are grieving.

For more from Dr Kaminsky, including her chat on The Garrett podcast, interviews on Radio National and more dive in to her website. You won’t regret it. 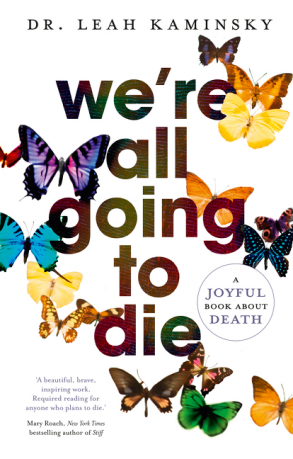